Home spain The Grandeur of Granada

The Grandeur of Granada 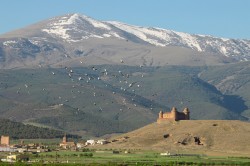 Ensconced in the lap of southern Spain, Granada is an idyllic yet popular province with an eminent historical background. Located at the foot of the picturesque Sierra Nevada Mountains, Granada seduces you with its visual treats and historical places to visit. Apart from its historical treasures, Granada also has an array of artistic and architectural splendors dating back to the 16th century. Art lovers are sure to make a beeline to Granada to revel in its artistic pleasures. Holidays in Granada are sure to make an unforgettable experience. Be sure to plan for a three day trip to Granada to have a wholesome trip to your heart’s delight.

An enchanting retreat with much to offer in terms of entertainment and exploration, Granada is sure to steal your heart with its zeal and exuberance. Book a Granada holiday rental to savor the secrets of Granada and you’ll surely cherish this memorable experience. Jot down these places as the must-see moorings in this mystic medieval town.

Step in to the sacred Granada Cathedral

This awe-inspiring colossal edifice dedicated to John, the Baptist and John the Evangelist is one of the most popular landmarks of Granada. This grand cathedral has the distinction of being one of the largest Gothic cathedrals in Spain with an interesting history. Built in the early 16th century, this church was constructed over the remains of the great Nasrid mosque. Its elaborate interior houses the Main Chapel, a vault, and a tabernacle

Don’t miss a glimpse of this Grand Granada Cathedral during your holidays in Granada.

A look at the Alluring Alhambra

Atop a small plateau above the Assabica valley, is the imposing and elegant Nasrid palace city of Alhambra. Declared as a World Heritage site, this fortress is an exquisite example of Spanish history, Moorish murals and Islamic Nasrid architecture. An alluring edifice, the Alhambra is an astounding attraction with its formidable fortress, ornate palace, spacious rooms, wide courtyards, lush gardens and patios.

Its expansive gardens, fruity orchards, lush and landscaped lawns and verdant vistas together form El Generalife which is a compulsive crowd-pullers for the tourists.

A unique blend of Muslim and Roman, the Alhambra is an indispensable element of your holidays in Granada.

Ramble among the city:

Visit the neighboring cities of Albazyin and Sacromonte to have a glimpse of the traditional Andalusian lifestyle and the classical cave dwellings. Watch the gypsies of Sacromonte strumming a guitar or spend a silent moment at the Abbey of Sacromonte.

Have a look at the monastery at the Charterhouse of Granada. Do not miss the Aynadamar or the “fountain of tears”. The tabernacle dome is a magnificent masterpiece of Spanish Baroque art, painting and sculpture.

Your holidays in Granada will remain incomplete without a visit to the nearby La Costa beaches or the virgin waves of Calahonda . Explore the underwater tunnels of La Herradura or the cave dwellings of Guadix or El Marquesado.

Book yourself into a nice Granada hotel like the Alhambra Palace or the Abades Nevada Palace. Sip some Granada orange juice while you tuck into tapas- the local delicacies of seafood, sausage and vegetables. Listen to some wild music at the local nightclub area and tap your toes to some flamenco music. Shop for ceramics, wood, leather or even guitars at the Alhondiga or the Alcaiceria.

In all, make the most of your Granada holiday rentals and enjoy its style and splendor.