Monuments to visit in Benalmadena 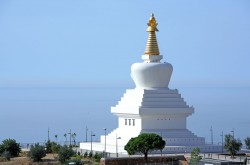 Benalmádena has been inhabited since prehistoric times. Benalmádena experienced a remarkable development during the period of Muslim domination. Its development was paralyzed after joining the Crown of Castile in 1485 due to various natural disasters and the intensity of the activity of privateers in the area.  Here is our list of the places you absolutely must visit in Benalmadena.

Paloma Park covers 200,000 square meters and is located about 200 meters from the main coastal road. There is a rectangular lake with a high jet of water and many paved walkways around this lake and the surrounding hill where one can take a walk. The park abounds in birds and there are hundreds of ducks, geese, pigeons, chickens and roosters, and peacocks. This is a beautiful park for families and children will enjoy it very much.

The pueblo, or old town of Benalmadena, is located on the upper portion of the city. The old town is a white town, where everything is painted white. It is quiet and it has its narrow streets paved with cobblestones. There is a beautiful town square planted with trees, shrubs, and flowers, with a beautiful fountain. The street beside it goes to an outlook where there is a fairly new church. The town sits on top of a hill that is 280 meters above sea level.

Colomares Castle is located at the Carretera del Sol in Benalmadena Pueblo. It was constructed by Dr. Esteban Martin y Martin, with the help of two masons, between 1987 and 1994. It has the look of a castle in a fairy tale and was constructed with brick, concrete, natural stone, wood, and other materials. It was dedicated to Christopher Columbus and his discovery of the New World. Inside there are beautiful glass windows.

The Buddhist Temple (Stupa) was built in 2004 and is the bigget temple of its kind in Western Europe. There are impressive views of the coastline fr om the temple. The architect was Wojtek Kossowski, who has built 16 other Stupas in Europe. The stupa is 33 meters (108 feet) tall with a base width of 25.8 meters (82 feet) and contains an over 100 square meter (1100 square-foot) meditation room inside. There is an impressive collection of traditional Himalayan paintings, statues, and literature in the temple. The paintings on the walls of the meditation hall represent the life story of the historical Buddha Sakyamuni and have been painted by artists from Nepal. In the basement of the Stupa there is place for exhibitions related to Tibetan Buddhism and the Himalayan culture. The temple holds regular meditation classes and talks on Buddhism.

The Church of Santo Domingo is the oldest church in Benalmadena. It was built in 1621 and the architect was Pedro Diaz de Palacios. The church was remodeled in 1960, and later in 1998.  There are three naves that are separate d by arches. The exterior has the episcopal coat of arms and a modern belfry. In the Evangelical nave, there is an Ecce-Homo sculpture of polychromed wood, created by the Granada school in the 18th century. The Epistle nave has a Virgen de la Soledad and a Virgen de la Inmaculada, both sculptures created in the 18th century.