Home spain Melilla – 5 Things to see and do

Melilla – 5 Things to see and do 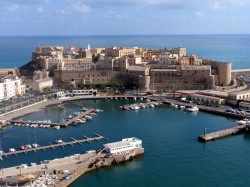 Melilla is the smaller and less affluent of the two enclaves. They mark the last vestiges of Spain’s African empire. With a third of its inhabitants being of Rif Berber origin, it has an atmosphere all of its own – neither quite European nor African. The centre of Melilla is a delight of modernist architecture and quiet gardens. If you are planning a trip to Melilla, here are the top 5 things you must do and see on your vacation.

The Calle de la Concepción continues up to the baroque Iglesia de la Concepción and, just below it, the entrance to Las Cuevas del Conventico. A short film and guided tour (both in Spanish) detail the history of the caves and tunnels that lead to the cliff face. The Phoenicians first excavated the tunnels; later occupiers took turns enlarging them and they now extend over three levels. They are meticulously maintained and well lit, which sadly eliminate s much of their mystery.

Construction of the new part of town, west of the fortress, began at the end of the 19th century. Laid out by Gaudí-disciple Don Enrique Nieto, Melilla is considered by some to be Spain’s ‘second modernist city’, after Barcelona. The highlight is Plaza de España, with the lovely facade of the Palacio de la Asamblea facing Parque Hernández.

The small Museo de Arqueología e Historia de Melilla has a collection of historical and architectural drawings, Phoenician and Roman ceramics and coins, and numerous models and archaeological finds. The terrace alone is worth visiting for its fantastic views overlooking the city.

Perched over the Mediterranean, Melilla la Vieja is a prime example of the fortress strongholds that the Portuguese and (in this case) the Spaniards built along the Moroccan littoral during the 16th and 17th centur ies. Much of it has been painstakingly restored in recent years.

Near the Iglesia de la Concepción, the Museo Militar is perched high over the Mediterranean. Its two small rooms are stuffed full of exhibits from the Spanish military in Melilla: regimental flags, medals, a motley collection of weapons and the obligatory bust of Franco.