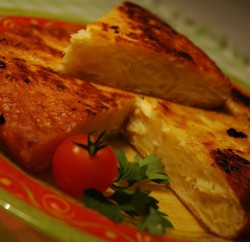 Tortilla de patata is my favourite Spanish food. And it’s so easy to make, you’ll probably be quite surprised! It is a typical Spanish dish consisting of an egg omelette with fried potatoes. Frequently it also includes onion depending on region or taste. It is usually served in Spanish bars as a tapa. (small portion)

Serve hot or cold, it’s delicious either way. I tend to prefer hot, with a slice of french bread. Mmmmmmmmm.