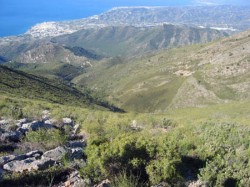 After Peter Smiths excellent post last month about walking in the Axarquia I thought I’d follow his lead and write about a new SGR (Sendero de Gran Recorrido) hiking route recently opened up in the National Park of the Sierras de Tejeda, Almijara and Alhama. This relatively new National Park which rests on the eastern ridge of the historic Axarquia region was only declared a protected area in 1999 but offers a wealth of walking opportunities for hikers of all levels to enjoy. The national park is no small place, covering an area of 40,663 hectares and made up of twelve separate municipalities. The range of landscapes it offers is truly breath-taking from its topical areas a stone’s throw from the coast to the baron 2068m high peak of La Maroma.

The new walking route which has the rather uninspiring name of SGR 242 is an 80km long collection of paths through the hills which link the coastal town of Nerja to the sleepy mountain village of Periana. It’s the brainchild of a group of small hotels and restaurants in the pretty villages along the trail which are looking to boost tourism and of course business in their little piece of the Andalusia countryside. Primarily they look to increase foreign visitor numbers although the area is already very popular with Europeans, with the French, Germans and Dutch making up the majority of the non-Spanish walkers in the region.

The 80km trek which never leaves the confines of the natural park has been divided up into five principal stages, Periana to Alcaucin (15.5 km), Alcaucin to Canillas de Aceituno (10.9 km), Canillas de Aceituno to Canillas de Albaida (24.4 km), Canillas de Albaida to Frigiliana (24.9 km) and Frigiliana to Nerja (15.0 km) all of which should be manageable to most walkers although thanks to the cooperation between local businesses you can really make up your own stages choosing to stay in any of the villages along the way with hotels affiliated to the initiative. Most of the paths present a moderate difficulty to walkers but there are some sections which will offer more of a challenge if you’re feeling up to it. 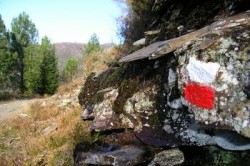 As part of the GR network of long distance footpaths that can be found across Europe, the SGR 242 uses the same standard marking method with a white stripe over a red used to show the way to hikers and has been fully signposted and inspected over the past two years to check its suitability and safety for users. In Andalusia routes of this type are inspected and approved by the Andalusian Federation of mountaineering (Federación Andaluza de Montañismo) and although maps of the region are generally of a poor quality those interested in undertaking this Axarquian adventure can visit the official website which provides everything necessary for walkers. Currently the site is only available in Spanish but more languages will be added soon and all maps are available here which are probably the most important thing of all!

So if you’re in the region and fancy tackling one of the SGR 242 sections why not take in the beautiful mountain scenery get some exercise and give it a go.