Home events The Many Ferias of Andalusia

The Many Ferias of Andalusia 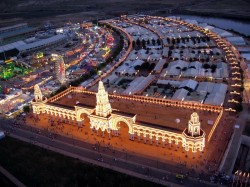 During the summer months Andalusia is seemingly awash with local fiestas and Ferias all in honor of various religious idols, some of which you’ll of heard of although many of which will be new to you. In fact, it’s frequently the case that each City, Town and Village will have a number festivals which even for an experienced visitor to the region can prove to be confusing.

In every location though you’ll find one big annual party, normally a week long local Fiesta held in honor of the areas patron saint. These are referred to as the patronage festivals which always contain the same base elements but also take on their own regional flavor according to the town in question.

Each Feria is made up of an official fairground site and a day fair whereby the streets are taken over by celebrations. Typically local businesses close down during this period and temporary bars (Chiringuitos) pop up where local wine will flow and impromptu music and dancing will inevitably bring the area to life. In the evenings people and events will migrate to the principal site of the Feria where you’ll find fairground rides, Marquees (Casetas) offering local food, wine and entertainment and the grand ‘official’ entrance to the festival, the ‘Portada’ usually made up of a series of arches decorated with references to local history and hundreds of lights. These events are also an opportunity to see many of the sights that any visitor will instinctively associate with Spain. Women in brightly colored Flamenco dresses, beautiful Spanish horses with riders sporting iconic Cordobes hats, Bull Fights which almost always take place in cities that have their own bullring and Flamenco music and dancing. Of course with so many of these Feriastaking place it’s impossible for a visitor to know which ones are worth the effort to actually go and see so I’ve picked my top three to point you in the right direction.

The Feria held in Cordoba during the final week of May is probably one of themost spectacular in Andalusia. It’s held to commemorate the discovery of an image of the Virgin Mary in a small well in 1665. The waters of the well were believed to return good health to the sick that drank from it and the cities summer fair was thereafter dedicated to the Virgin of Health. The Portada is quite simply the most breathtaking in Andalusia at 45m tall and 140m wide, covered in lights with lots of references to Cordoba’s extensive Moorish past.

This Feria is a fantastic mix of the tradition and showmanship of Seville’s fair without the snobbery. You’ll see fantastic displays by local horsemen who proudly parade their pure breed Spanish horses and finest traditional clothes. The object being a display of traditional elegance and values. Also, the vast majority of Casetas are open to the public and offer the typical tapas and drinks as well as some pretty hardcore Flamenco performances which are far flung from those you may have seen whilst visiting the coastal resorts. The Feria at Cordoba is however very popular and accommodation is usually booked up well in advance so you need to plan ahead if you want to take in the sights and sounds that this event has to offer. 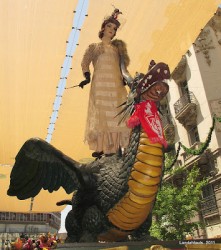 Granada’s seven day long Feria is held coinciding with Corpus Christi (the first two weeks of June) and offers many of the traditional events including two separate processions through the city. The first is the Tarasca which takes place on the Wednesday of the Feria week and features the figure of a woman stood atop a dragon being carried through the city accompanied by giants and other characters dressed in costumes and wearing large papier maché heads and masks. It’s a rather surreal sight and not what you’d necessarily expect from an Andalusian procession but it’s worth noting that this event has its roots in Pagan origins.

The second of the processions is however a far more solemn and religious affair, held on the Thursday and named after the feast of Corpus Christi. The great thing about the Feria of Granada is that it takes on many of the best aspects of Granada city itself with a fascinating mix of a strong Moorish identity, the modern day Catholic influences and the fun and party atmosphere that a large student population will bring to any event. This final point also means that you’ll get great value for money here with drinks and food being very reasonably priced and entrance to the Casetas generally free. 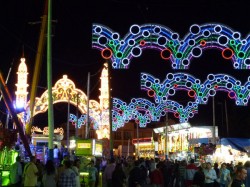 The second week in October traditionally brings the Feria in honour of the Virgin of Anguish and Archangel Saint Michael to the pretty coastal town of Nerja on the Eastern end of the Costa del Sol. This is only a small Feria in comparison to those already mentioned but it conjures up a perfect mix of sun, sea, sand and fiesta in a relaxed, underdeveloped corner of Andalusia.

You can enjoy the festival atmosphere in the evening and take in a bit of sun during the day on one of the best beaches in the region found in the neighbouring village of Maro. As part of the five day long celebration you can also get tickets for a classical concert at the Nerja Caves, which were discovered some fifty years ago and offer an incredible natural setting for such an event with fantastic acoustics. If you’re looking for a smaller event to which you can take the kids, in a setting that still holds onto its stereotypical Spanish charm this is without doubt one of the best places to find it.