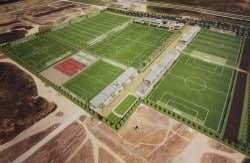 The Academy is one of the fundamental pillars of Málaga Football Club, and in collaboration with UNESCO, the official partner, it assumes responsibility for the sports training and education of the young Blues and Whites players. Now the process of expansion and development, Málaga Football Club’s Academy is planning to construct a major new Sports Village in the city of Málaga, and in other key places throughout the province, which will allow it to become, thanks to its philosophy and methodology, a flagship youth training facility at a national and European level.

In the academy, all players between 5 and 12 years old can train in the facilities offered such as Sports City of Malaga Football Federation and under the orders and methodologies of the coaches of the Academy.

The MCF School aims to teach the young boys and girls to play football but taking care of the transmission of values inherent to sport such as respect, effort and team work, as well as aiding personal development for the players.

This school belongs to the Academy of Málaga Club de Fútbol and, therefore, their coaches and their work methodology will be directed by the same management. Each player will be given the necessary training materials: two technical shirts, trousers game, a sweatshirt, sweatpants and a balloon. All material are official product of Málaga Club de Fútbol. Besides all the training in the sports field, they are also given seminars on nutrition, social networks, healthy habits and more in addition for the education.

The football club has already plans drawn for the expansion and opening of new facilities such as the new sports complex at Arraijanal. This project is a major priority for the football club despite their financial difficulties. These plans include an area for the first team, three other pitches that can be used for 7-a-side football games, offices, changing rooms, cafeteria and other necessary elements. All the construction works will take place in three different phases, the first one starting soon in spring and going on for eight months estimate.