Dolph Lundgren is Ambassador of Marbella 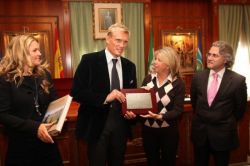 The famous action hero Dolph Lundgren is the new Ambassador of Marbella. The swedish actor lives together with his wife and his two daughters in Marbella. The actor, director, script-writer, producer and once Captain of the Swedish National Karate Team is well known for his martial arts films in Hollywood or the part of Iván Drago in Rocky IV besides Sylvester Stallone and as well played together with James Bond in “A View To A Kill” where he had to protect his partner, actress and singer Grace Jones. Besides Alejendro Blanco, President of the Spanish Olympic Committee, Dolph Lundgren is the second Ambassador of Marbella.