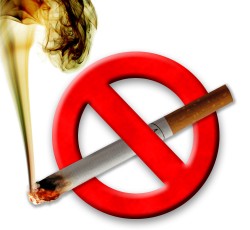 The new anti-smoking law has finally been approved in Parliament and will take effect from January 2, 2011. This means that all enclosed public spaces will be smoke-free, which even includes bars and nightclubs. Not even sealed-off smoking areas will be allowed, except in amusement arcades where no games will be installed and no drinks or food can be served in the smoking zones. Even the smoking areas in airports like they have in Madrid Barajas will be removed. In hotels only 30 per cent of the rooms will allow smoking. The only enclosed public space where you are able to smoke is in prison, but who wants to stay there.

In restaurants and bars  you will be allowed to smoke at outside tables as well as in the open air at university premises. But you better be careful in schools, children’s parks or in the doorways of hospitals and health centres which is obviously not the right place to smoke.

All this sounds quite good for non smokers but has a small side effect. The hotel and catering industry is set to lose around 7,000 million euros as a result, since many smokers will choose to drink at home instead.

This translates to 50,000 jobs, not counting those potentially lost by a reduction in takings at tobacconists’ shops.

Is this really a good decision?