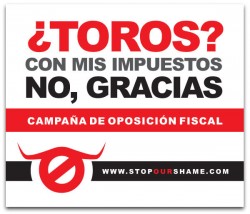 As per my previous article on bullfighting, the region of Cataluña has recently passed a bill to forbid bullfighting as of 2012, although there were whispers heard afterwards that the decision was based as much on politics and separatism as it was on any concern for the rights of animals and cruelty towards them. On average, the annual revenue accrued from bullfighting is £2.2bn and 13,300 bulls are killed in official bullfights every year (which is the equivalent to 36 bulls every single day) However, the total number killed is estimated to be 3 times as high.

The reaction from the rest of Spain to the historical ban has been completely the opposite to Cataluña, with many regions defending the “fiesta nacional“. However, the true home of bullfighting has always been Andalucia. It is here that much of the industry that surrounds the Spanish tradition is created.

In the beginning of August this year, the mayor of Ronda, Antonio Marín, requested to the Andalucía government for them to deem his town the centre of studies and investigation of “Tauromaquia“. Ronda’s famous bullring was founded in 1785 – the oldest in the entire country – and the mayor would like his town to have the role to defend “the traditions of Andalucía”.

Now, it has come to light that the political group “Los Verdes” are going to propose a similar ban for Andalucía. “Los Verdes” reasons and arguments were detailed by Mario Ortega, Los Verdes spokesperson. He was quoted as saying the ‘fiesta nacional’ would not survive in Andalucía if it did not receive subventions from the public authorities. He also claimed that bullfighting receives 13 million euros from town halls, 12 million from the regional government, nine million from the various provinces and four million euros from RTVA – the Andalucía broadcaster.

“Los Verdes” task now is – within 3 months – to constitute a platform with the help of associations and social networks. They are also requesting that the Electoral Board authorise electronic signatures, which would greatly enhance the chances of achieving the 25,000 signatures which are essential to take the Legal Initiative before the Andalusian Parliament.

It is indeed an interesting turn of events, as back in July, the President of the Junta de Andalucía, José Antonio Griñan, was quoted as saying he was “totally against” the ban and that a referendum would be called before a similar decision was made in Andalucía.