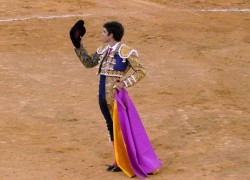 Wednesday, the 28th July 2010 was an historical day in Cataluña as bullfighting was officially banned during a vote in the Catalan parliament. The controversial decision was announced in the morning after 66 voted in favour of the prohibition, 55 voted against and 9 abstained from voting at all. The prohibition ban will take place from 2012.

Barcelona first decided to debate the issue in December 2009, after a petition to include the bull in existing animal protection legislation gathered over 180,000 signatures. Eric Gallego, a speaker for the group known as Prou was quoted as saying “Bullfighting is about animal rights, it’s about cruelty and about a bloody entertainment. We think that we must stop this cruelty because we don’t want to be a barbaric society inside Europe.”

The verdict of the vote on Wednesday was met with thunderous applause from the group of animal rights activists who were present to watch the voting session, while no doubt the trainee “toreros”, for whom bullfighting is glamorous and alluring profession were less enthused as they watched the event unfold.

Cataluña is the second region to ban bullfighting after Spanish-owned Canaries prohibited the activity in 1991.

Bullfighting is still hugely popular in other parts of Spain, such as Andalusia – however that may not be the case for long as anti-bullfight activists have vowed to spread their campaign across the country.