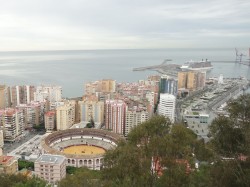 It is easy to understand why Malaga City is dubbed the Capital of the Costa del Sol. Once considered the poor cousin of Andalusia’s Capital city, Seville, it now competes successfully for attention, thanks to its profusion of quirky museums, pedestrianised shopping centre, innovative restaurants and stylish hotels, many featuring trendy rooftop terraces with bar, pool and stunning views. Muelle Uno is the latest addition; a leisure complex in the port and a new grass roots art district call SOHO is fast developing. Visitors are now flocking to this port city which boasts excellent transport, top-class cuisine and fascinating monuments, from Moorish and Roman times through to modern day – while retaining its authentic Andalucian feel. Whether you are visiting Malaga from a cruise, a weekend break or a curious Costa del Sol visitors you will be pleasantly surprised by Malaga City.

Its construction stretched from the 16C to the 18C and the mixture of styles is very apparent. With a predominance of the Renaissance style. Inside, admire the attractive bays covered with highly decorated domes on pendentives, the superb stalls of the coro and the two magnificent Baroque organs. Also discover the attractive works housed in the side chapels and, around the ambulatory, in the chapels of Our Lady of the Kings and St Barbara.

Built from 1040 onwards on a hill dominating the town of Malaga, the fortress is one of the largest Muslim military buildings preserved in Spain. Appreciate over the remains of the brick walls that cling to the hill and see the fortified gates decorated with columns and Roman capitals. Do not miss the Arab gardens with marvelous alleys of bougainvillea, jasmine and honeysuckle, or the superb view over the town and the port.

Sanctuary of the Virgin of the Victory

The Catholic Monarchs in the 15C founded this church whose interior is particularly representat ive of the Baroque Andalusian style and it was rebuilt at the end of the 17C. Do not miss two particularly interesting parts: the showy recess, masterpiece of the most exuberant Baroque style where a superb 15C German Virgin and Child sit; thecrypt, pantheon of the counts of Buenavista, in a gloomy Baroque style with symbols of death and the passing of time.

The splendid garden on the edge of a nature reserve was laid out in the mid-19C. The son of a shipowner from Málagar got his father’s boats to bring back tropical and subtropical species that he then introduced to the region. A century and a half later, this has resulted in an enchanting tropical forest dotted with pools and waterfalls. Perhaps it was in the superb wrought-iron arbour with its wisteria, ivy and bougainvillaea that Antonio Cánovas del Castillo, who often used to come here, drew up the 1876 Constitution.

The centre of Malaga has preserved some interesting Christian monuments. The many alleys, mostly pedestrianised, have all the charm of Arab towns, such as thepasaje de Chinitas. All of this lively commercial zone revolves around the Marqués de Larios Street. This is the main street in town.

The Baroque Episcopal palace (18C), which stands on the Obispo square, opens onto an attractive doorway in grey and red marble with Corinthian columns and projecting entablatures. The upper recess contains a Pietà.

Below the fortress of Malaga, on the west slope, the ruins of the theatre are evidence of the Roman history of the town. You can still see some stepped seats of the cavea running along the hill. Nearby, the old neoclassical customs house, is today the seat of the provincial parliament.