Home news Spain’s Smoking Ban – to enforce or not – is the question?

Spain’s Smoking Ban – to enforce or not – is the question? 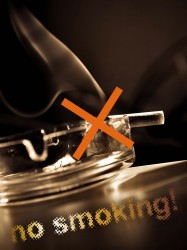 It’s been said since August 2009 that Spain would impose a smoking ban in all closed public areas, i.e. clubs, restaurants and bars at the beginning of 2010.

The current legislation which has been in place since 2006 forbids smoking in the workplace and on public transport, but permits the smaller bars and restaurants to choose whether to allow smoking on the premises or not. If they do allow it, they must provide a separate closed-off area for smokers. The subject has been confused at best and when a stronger law was first discussed properly in 2009, a specific date to impose the smoking ban in 2010 was never decided upon.

However in the North of Spain, the government has once again made plans to come down hard on smokers. The Basque regional government said last Wednesday that a stringent anti-smoking law is coming soon, which will make it illegal to smoke inside a car if a minor is present. Under the draft law, which now must be approved by the regional parliament, adults will also be banned from smoking in places like playgrounds that are destined for use by children.

The proposed public smoking ban in Spain has now been put back until 2011, raising doubts whether it will ever happen at all. The Minister for Health, Trinidad Jiménez, has been reported as saying that he is prepared to postpone the legislation for a year in the case of bars, following an avalanche of complaints from the hostelry sector and even the CEOE Employers’ organisation who profess to be deeply concerned about the effects of such a ban at this time of recession and following the increase in IVA which came into effect on July 1st. The tobacco companies have also predictably made representations and are calling for a five year delay.

Spain is one of the last countries in Western Europe to adopt a smoking ban and shows no signs of backing down entirely to become a “nanny state” just yet.