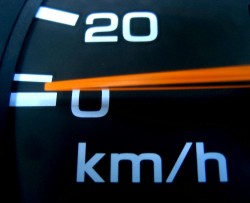 Spain tries everything to save fuel. Now that the oil prices went up again and jumped to 120 dollars a barrel in just one week the prices consumers are paying for petrol and diesel are now at record highs. The tensions in North Africa are no problem to supplies but the government said that something has to be done to fuel costs. To save fuel the government has announced that the speed limit on major roads will be brought down from 120 kph to 110 kph. With this drivers will save 10 to 15 percent petrol or diesel. From today, March 7th the maximum speed on motorways and dual carriageways will be reduced to 110 kph.