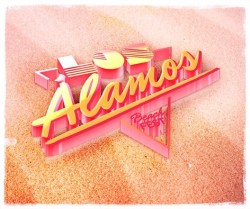 The first edition of the biggest music festival in Costa del Sol to take place in Los Alamos Beach in Torremolinos during 16-19 July, counting with few of the most internationally recognized DJ’s in the music scene currently.

This new festival held on the beach at Los Alamos is born from the joint effort of several local businessmen. Through the proposal, they want to encourage the growth of tourism as important as this enclave and, at the same time ensure that both, local and foreign tourists live an unforgettable trip to this side of the Costa del Sol this summer.

The first edition of Los Alamos Beach Festival focuses on the golden age of Torremolinos, a time that has not been left behind, but it can reinvent and adapt to our time. This won’t be an ordinary festival, for four days you will live concerts and sunsets, but also great moments surrounded by thousands of people dancing and enjoying to great live music played by the best DJ’s never seen in Costa del Sol before making the festival an unique and first time event.

Divided into three stages, few of the best and most known musical icons worldwide and the biggest names in the international current DJ’s scene will be playing, such as Dimitri Vegas & Like Mike, Michael Calfan, Quintino, Les Castizos, The Chainsmokers, Albert Neve amongst many others local and national dj’s and artists. Their music will be the soundtrack to a unforgettable summer getaway.

They have prepared all the amenities needed for these events and more activities such as water rides, entertainment areas and food and rest areas, lockers and stands. If you want special treatment, there are also VIP passes available that include an area with reserved tables or boxes with exclusive service and spectacular views of the stage and direct access to the place without waiting in queues.

The main days of the festival are Friday 17 and Saturday 18 when all the different concerts will take place. But there are other activities planned too, such as a pre-party on Thursday 16 at the beach and a closing after party on Sunday 19 at Sol Beach Club where everyone is invited to attend and finalize the weekend in a great way. Tickets start at a rate of 40€ and there are different types such general tickets just for concerts, camping passes with camping facilities or VIP access.