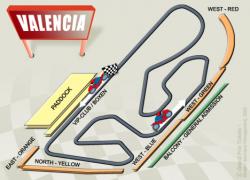 On 4th of November the last round in the 2007 Motorbike Grand Prix Championships is to be held at the Circuit Ricardo Tormo in Valencia. The circuit is 30 minutes west of the city of Valencia and there are expected to be up to 150,000 spectators to watch the five-time World Champion Valentino Rossi trying to reclaim his title from Nicky Hayden on the four kilometre anti clockwise circuit. This race in Valencia means sun, fun and a lot of racing. So don´t miss the last Moto GP in Valencia, either direct or at least on TV. The race starts at 1:15 PM.