The name Andalusia traces back to the Arabic language Al-Andalus. As well as Muslim and Romani influences, the region’s history and culture have been influenced by the earlier Iberians, Phoenicians, Carthaginians, Greeks, Romans, Vandals, Visigoths, Byzantines, all of whom preceded the Muslims, as well as the Castilian and other Christian North Iberian nationalities who regained and repopulated the area in the latter phases of the Reconquista. The geostrategic position of Andalusia in the extreme south of Europe, providing a gateway between Europe and Africa, added to its position between the Atlantic Ocean and the Mediterranean Sea, as well as its rich deposits of minerals and its agricultural wealth, have made Andalusia a tempting prize for civilizations since prehistoric times.

With the fall of the Phoenician cities, Carthage became the dominant sea power of the western Mediterranean and the most important trading partner for the Phoenician towns along the Andalusian coast. Between the First and Second Punic Wars, Carthage extended its control beyond Andalucia to include all of Iberia except the Basque Country. Andalusia was the major staging ground for the war with Rome led by the Hannibal Barca. The Romans defeated the Carthaginians and conquered Andalucia, the region being renamed Baetica. It was fully incorporated into the Roman Empire, and from this region came many Roman magistrates and senators, as well as the emperors Trajan and Hadrian.

The Vandals moved briefly through the region during the 5th century AD before settling in North Africa, after which the region fell into the hands of the Visigothic Kingdom. The Visigoths in this region were practically independent of the Visigothic Catholic Kingdom of Toledo. This is the era of Saints Isidore of Seville and Hermenegild. During this period, around 555 AD, the Eastern Roman Empire conquered Andalusia under Justinian I, the Eastern Roman Emperor. They established Spania, a province of the Byzantine Empire from 552 until 624. Though their holdings were quickly reduced, they continued to have interests in the region until it was lost altogether in 624. 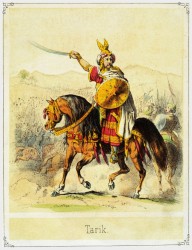 The Visigothic era came to an abrupt end in 711 with the Umayyad conquest of Hispania by the Umayyad general Tariq ibn Ziyad, an Islamic Berber. Tariq is known in Spanish history and legend as Tariq el Tuerto (“Tariq the One-eyed”). The Muslim conquest—by the Umayyad Caliphate—of the Iberian Peninsula in 711–718 marked the collapse of Visigothic rule and the establishment of the Islamic Empire era. Andalusian culture was fundamentally influenced by over half a millennium of rule by many Muslimcaliphates and emirates.

Already in the 10th century, the Christians of northern Spain had begun what would eventually become the Reconquista: the reconquest of Spain for Christendom. The weakness caused by the collapse of Almohad power and the subsequent creation of new Taifas, each with its own ruler, and led to the rapid Christian reconquest of the valley of the Guadalquivir. Córdoba was regained in 1236 and Seville in 1248. The fall of Granada in 1492 put an en d to Muslim rule in the Iberian peninsula.

On 3 August 1492 Christopher Columbus left the town of Palos de la Frontera, with the first expedition that resulted in the discovery of America. Many Andalusians participated in the expedition that would end the Middle Ages and signal the beginning of modernity. Contacts between Spain and the Americas, including royal administration and the shipping trade of Spanish colonies for over three hundred years, came almost exclusively through Andalusia. As a result, the region became the wealthiest and most influential in Spain and one of the most influential in Europe.

Following the Second Rebellion of the Alpujarras in 1568-1571, the Moorish population—that is, unconverted Moriscos—were expelled from Kingdom of Castile (and Aragon). However, by order of the Spanish crown, two Moorish families were required to remain in each village in order to demonstrate to the new inhabitants, introduced from northern Spain, the w orkings of the terracing and irrigation systems on which the district’s agriculture depends.

Andalusia profited from the Spanish overseas empire, although much trade and finance eventually came to be controlled by other parts of Europe to where it was ultimately destined. In the 18th century, commerce from other parts of Spain began to displace Andalusian commerce when the Spanish government ended Andalusia’s trading monopoly with the American colonies. The loss of the empire in the 19th century hurt the economy of the region, particularly the cities that had benefited from the trade and ship building. The construction of railways in the latter part of the 19th century enabled Andalusia to better develop its agricultural potential and it became an exporter of food. While industrialization was taking off in the northern Spanish regions of Catalonia and the Basque country, Andalusia suffered from its deep traditional social divisions between a small class of immensely wea lthy landowners and a population made up largely of poor agricultural laborers and tradesmen.