Home news Heatwave to continue over the weekend

Heatwave to continue over the weekend 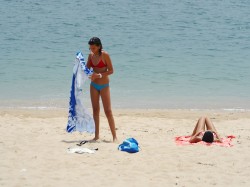 The current heatwave in the south and the centre of the country is expected to last longer. Maximum temperatures will hit at least 42ºC in the shade and will cool down to night temperatures reaching around 24ºC. The state meteorological agency, AEMET, says that the weekend could even be hotter than ever. The hottest parts of the country will be Andalucía, Murcia, Extremadura and the south of Castilla-La Mancha with temperatures reaching 40-42ºC. By next Monday the summer temperatures are expected to cool down a bit, at least in the north of Spain. Summer is still not over.