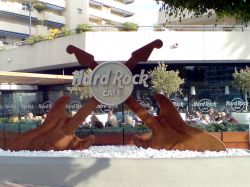 Just a few weeks ago on the 29th October was the Grand Opening Celebration of Hard Rock Cafe Marbella. The Marbella cafe is Spain’s fifth Hard Rock Cafe after Barcelona, Madrid, Mallorca and Gran Canaria. It is situated in the heart of Puerto Banus, on the corner of Plaza Antonio Banderas, opposite the El Corte Ingles department store and adjacent to the Marina Banus shopping centre. The new establishment is of around 1000sqm and has recently received a 2.5 million euro installation and decoration investment. There is space for around 300 people. As well it includes a bar, an open-air terrace and Rock Shop, and also features Hard Rock’s limited-edition merchandise. The new cafe is expected to create about 70 permanent jobs and up to 100 in summer and will definetly bring some more tourists to the port of Marbella.

There are always many people at the new Hard Rock Cafe, so be aware that there could be a small queue to get in. But they handle it quite well and give you a small pager which vibrates when it’s your turn. Nice idea, so you can go to the bar while waiting and don’t have to actually stay in the queue

The Opening Celebration on October 29th was celebrated by Javier Ojeda from the legendary Spanish band Danza Invisible, who performed an acoustic set with two other musicians and a second set with Free Soul Band, a truly funky band from nearby Málaga.