Home travel Aqueduct of Nerja to be restored

Aqueduct of Nerja to be restored 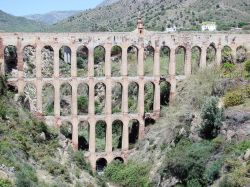 The aqueduct in the illustration is not as old as it might appear, but it’s still quite famous. It was built to supply water to the sugar plantations in Nerja in the 19th century. The Aqueduct is situated near Maro and is officially called Acueducto del Águila or better Aqueduct of the Eagle. The structure, which has already been classified as being of “cultural importance”, is one of the projects from the Initiative for Sustainable Tourism in Axarquia. Nerja Town Hall now asked the Junta de Andalucia’s Culture Department to contribute to the restoration which will cost 792.000 Euros. It is hoped the works to restore the monument will begin at the start of next year and should take about 12 moths to finish.