The Grand Hotel Miramar in Malaga 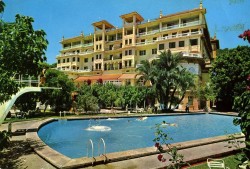 The Grand Hotel Miramar announces its opening in 2016 being the first five-star luxury hotel in the capital of the Costa del Sol.

The building was built by architect Fernando Guerrero Strachan in 1921. Five years later it was inaugurated by King Alfonso XIII with the name of Hotel Prince of Asturias and housed in those years many illustrious guests of royalty and European bourgeoisie.

During the Spanish Civil War, the hotel became a field hospital of the city, and remained so under the name of Military Hospital Miramar until 1939. After the war it continued its activity as a hotel retaining the name of Miramar. It closed in 1967 by the great economic difficulties.

It has remained closed until it was acquired by the Ministry of Justice and became headquarters of the courts of Málaga, which in 2007 moved to the current City of Justice, and since then the works started to restore this landmark building to its original use as hotel.

The Grand Hotel Miramar announces its opening in 2016 and the property will be the first five-star luxury hotel in the capital of the Costa del Sol. The hotel will count with almost 200 rooms and the building faces the Pablo Ruiz Picasso Promenade and has great views.

Furthermore, the property will feature original historical rooms for bigger events and also the terraces and gardens will be available for outdoor events. It will be equipped with 198 rooms, 23 suites with independent living room and spacious terraces, all with different designs to customize each suite.

The hotel will count with a space of 9,000 square meters surrounded with gardens filled with ancient trees, a large terrace with a swimming pool, a spa, a nursery area and parking with plenty of spaces. They also offer meeting rooms for corporate events and private dining rooms for special celebrations, among other facilities.