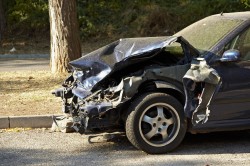 If you’re one of those people who think that you will never be in a traffic accident, and continuously think “that will never happen to me” you might want to read on…

A study that was recently carried out by the insurance business association UNESPA reveals that an accident involving material damage whilst driving occurs every eight minutes and 51 seconds on Málaga roads, while personal injury is caused in a road accident every one hour and 41 minutes.

These devastating figures mean that unfortunately, Málaga is the Andalusian province where most traffic accidents happen.

If you add to this the fact that around 150,000 cars are on the road in Málaga with no insurance (source: The Andalucian Institute of Statistics, December 2010), your chances of being hit in an accident caused by someone else, and not having the means to cover the costs incurred increases dramatically. Despite the fact that being caught with no insurance equals harsh fines of between 601 and 3,000 euros, when statistics from the database at the Traffic Department (DGT) were released last week they showed that only 897,180 owners had a valid insurance policy – and that’s compared to a total of 1,044,361 vehicles which were registered in the province of Málaga in 2009!

And all of this without a drop of alcohol.

So, what happens if you mix in a little “party spirit”?

You should know that :

And as you drink more, so your BAC level rises… but it doesn’t just rise… it multiplies.

Put in simple terms, that means if you manage to drink through a six-pack of beer before getting behind the wheel, you’re 48 times more likely to have a fatal accident than a person who doesn’t drink at all.

With this in mind, stay safe this Christmas. Be sensible. If you’re going to drink, don’t drive.

If you plan to party away from home be sure to appoint a designated driver for the car or just get a taxi! Whatever you do, don’t get behind the wheel if you’ve been drinking.

Christmas is time to be with your closest family and friends, so enjoy yourself and keep safe.