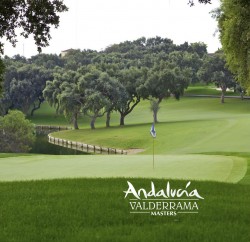 Just five month after the Volvo World Match Play Championchip at Finca Cortesin, big time golf returns to the Costa del Sol this month with the Andalucia Masters at Valderrama. For the second successive season, Andalucía will host the final European Tour event of the year to be held on European soil with the staging of the Andalucía Valderrama Masters from October 27 to 30. The prestigious Club de Golf Valderrama will be play host to the tournament, which will feature a field of top class players competing for a 3 million Euro prize purse.

The world-famous Valderrama course has hosted 16 Volvo Masters events, the first two editions of the American Express-World Golf Championship and The 1997 Ryder Cup, when the late, great Seve Ballesteros led the European Team to glory on home soil.

The club is haven for dozens of species of wild animals and birds and is populated by over 2.000 cork trees, 500 olive trees and 3.000 Halipi pines. The course record is 62, held by German Bernhard Langer, the first time in 1994 and again in 2002. Under the revised par 71 layout, a new course record of 66 was set by Angel Cabrera and equalled by David Howell.

The Autonomous Government of Andalucía, the owner of the tournament rights and its main sponsor, has entrusted Octagon and GFC Golf & Business with the organisation and promotion of the Andalucía Valderrama Masters. Both companies are specialized in sports marketing, mainly in tennis and golf tournaments, and are well respected. The staging of the Andalucía Valderrama Masters will provide a perfect platform for the Tourist, Trade and Sports Board of Andalucía to showcase the region as a first-class tourist destination as well as a top sporting venue. This year, Andalucía will host 11 different sports events with a huge media impact due to the quality of the participants, from golf through to tennis cycling, cross-country running, sailing, hiking, triathlon, skiing, mountain bike and motorcycling.

Graeme McDowell won the inaugural Andalucía Valderrama Masters, the Ulsterman capping an outstanding season by securing his seventh European Tour title. Earlier in the year, he had captured his first Major at the US Open Championship shortly after his success at the Saab Wales Open, at the same venue where he would become a Ryder Cup hero by securing the winning point for Europe. McDowell said: “Valderrama is an iconic course, one of the best on the planet. It’s great to have my name in the list of winners on this course.”