Tom Jones in Concert in Marbella 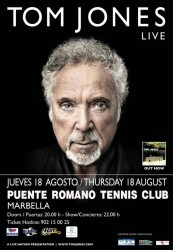 Hotel Puente Romano in Marbella presents another great star, Sir Thomas John Woodward, better known by his stage name Tom Jones. Since the mid 1960s, Tom Jones has sung many styles of popular music – pop, rock, R&B, show tunes, country, dance, techno, soul and even gospel – and sold over 100 million records. His last album Praise & Blame which came out about a year ago has been a massive success for the welsh singer. Tom Jones has now embarked on a tour to present his 39th studio album. Praise & Blame was made up of largely little known devotional and gospel covers, marking a departure from the pop-orientated style that had dominated Jones’ recent recordings. The concert will take place on Thursday, August 18th 2011 at Marbellas Hotel Puente Romano Tennis Club and start at 10:00pm. Tickets are available through www.ticketmaster.es and start at 90 Euro.

Live in Concert – A tribute to Queen – 5th August

Marbella is the place to live and enjoy luxury