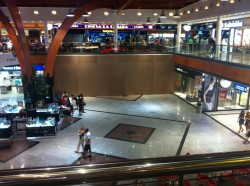 The US consumer giant Apple will open an Apple store in La Cañada shopping center in Marbella. But not just any store, it will be Spain’s biggest Apple store. This will be the first Apple store in Andalucia or even south Spain and only the fourth in Spain. September last year the very first Apple store in Spain opened in Barcelona in the shopping center La Maquinista with a size of 1300m2. Two more stores are in Madrid Parquesur and Xanadú, both with a size of only 800m2 each. They all opened to long queues of people eager to get through the doors. The Apple store in La Cañada is due to open mid November or even earlier with a size of 1700m2. It will be located on the ground floor opposite the main entrance where Habitat was before. Preparations for the new Apple store Marbella are being carried out in secret and the windows and access to the store are covered with black screens. It has been said, that they already have 65 employees.