Home news On the Spot fines for Foreigners

On the Spot fines for Foreigners 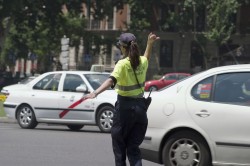 In August this year The Traffic Department (DGT) in Spain launched a new system to ensure that foreign drivers caught by fixed radar devices are forced to pay on the spot, therefore these foreign drivers caught speeding on Spanish roads will no longer be able to escape paying the fine just because they live outside the country or are difficult for authorities to track down.

The new system involves radar equipment that can recognise foreign licence plates and automatically notify the nearest Guardia Civil patrol car, including a photograph of the speeding vehicle. The officers can then pull over the vehicle and fine the driver – fines which could go up to as much £500! (€600) The unlucky ones who cannot come up with the payment instantly could face having their vehicle immobilised.

Tráfico’s deputy director, Federico Fernández said the fine that is charged is technically a deposit, pending any possible appeal by the driver.

He was also quoted as saying “Up to half the speeding motorists in some of the areas where this new system is operating drive foreign-plated vehicles. Excess speed is a contributing factor in a third of all fatal accidents so lives may be saved with these new measures.” He was quick to deny any prejudice connotations with the following statement: “This is not a witch hunt against British or foreign drivers. Nor are we targeting specific nationalities.”

The foreign plate detectors have been installed on the A31 in Alicante, the AP7 in Castellón, the A52 in Zamora and the A7 in Murcia. These roads were chosen because officials have determined that around 30 per cent of infractions on these roads are committed using foreign-plated vehicles, increasing to over 40 per cent in the summer period.