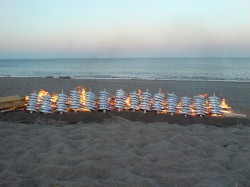 The night of 23rd June, called San Juan night, is a night of party to welcome the summer. Thousands of people in Spain celebrate this night traditionally with bonfires by the beach, fireworks, drinks, food and music.

The Night of San Juan is a festival of pagan origin which takes place the night of 23rd June and usually there are bonfires and it is linked with celebrations on the arrival of the summer solstice and having the main ritual consisting of fires placed by the beach. The original purpose of this ritual was to “give more power to the sun”, as since this day was becoming “weaker” because the days are getting shorter until the winter solstice. Symbolically the fire also has a “cleansing” function in people who watch it. This night is also related to ancient traditional legends and stories which gives it a magical atmosphere.

San Juan is celebrated in many parts of Europe, with major importance in Spain. Depending on the location or city, is celebrated in different ways but generally have in common some aspects such as the bonfires, the fireworks and the music, food and drinks that can’t be missed in any party. 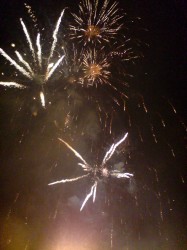 In Malaga and the Costa del Sol San Juan is a very popular festival that is usually celebrated with the traditional “moragas” that consists of barbeques by the beach and bonfires organized in family or by group of friends. Some of the superstitions and traditions surrounding this night include making wishes while jumping over the bonfire, swimming in the sea at exactly midnight for good luck or burning old things in the fire or memories that you want to forget.

In the past few years, this night has become quite popular and is not just celebrated in the traditional way with “moragas” but also you can find good parties with live music and DJ’s playing through the different beaches of the Costa del Sol. There are different type of events such as foam parties, music concerts and the local beach clubs and “chiringuitos” also offer special parties for this night that can last until early morning.

So if you are in the Costa del Sol during the day of San Juan, you have many options and ways to celebrate this magical night. It is good also to simply give a walk by the beach, wet your feet at midnight and enjoy the fireworks and the bonfires.