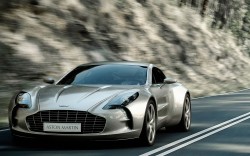 Everybody knows that you can see very unique and expensive cars in Marbella and Puerto Banus. Now the exclusive car dealership C. de Salamanca has sold one of the most expensive cars ever to be sold in Spain. The Aston Martin One-77 is the most expensive model from the legendary British car maker and has a hefty price tag of 1.8 million Euro. The buyer of this exclusive car is not known and the dealership has not named it, but they described him as a successful foreign businessman, middle aged, and a car fan, obviously. They said it took him five month to decide on the purchase, but at the end he paid a 400,000 Euro deposit to get the car. He personally went to the factory in Warwickshire to request the personalisation’s of the vehicle which will come in a blue silver. Aston Martin are to make only 77 cars of the Aston Martin One-77 which boasts an 7.3 litre V12 engine with 760 horsepower. The car will be delivered in March next year, when we need to watch out for another exclusive car in this area. Marbella still has its exclusivity.