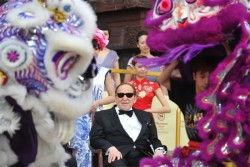 American billionnaire Sheldon Adelson and owner the Las Vegas Sands Corporation has announced a $35 billion investment on massive Las Vegas-style casino complexes in Madrid and Barcelona. Following the opening of his latest casino complex in Macau, the Sands Macao, Mr Adelson told Reuters: “We are looking at 12 integrated resorts, 3,000 rooms each. A mini Las Vegas about half the size of the Las Vegas strip in Spain for the European market.” It is estimated that each casino building could cost the Las Vegas Sands group between 2.5 and 3 billion dollars to build and would be completed in about a decade. The company would target wealthy customers from Western Europe but also the burgeoning tourist class from the former Eastern bloc. The project is in the planning stages and a decision by the Spanish government is expected to come in the next three months.