Home cars Ascari A10 – one of the worlds fastest cars

Ascari A10 – one of the worlds fastest cars 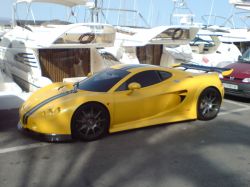 The Ascari A10 is a car produced by the British company Ascari Cars. It is a road-going evolution of the KZ1-R GT race car currently contesting the Spanish GT Championship, with both cars penned by ex-Formula One designer Paul Brown. The A10 features a 5.0 L BMW V8 engine producing 600 bhp/447 kW. The A10 shares the same basic carbon fibre chassis as the KZ1, with all-new bodywork and racing-derived suspension. Despite the addition of an FIA-spec roll cage and the fire-suppression system, the removal of soundproofing and such luxuries as air conditioning and a stereo system contributes to the A10’s relatively light weight of 1,280 kg. 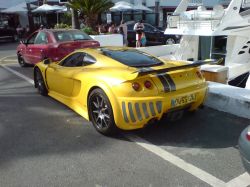