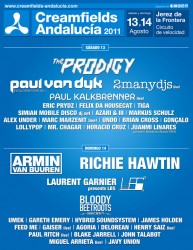 Creamfields Festival is coming to Andalucia – and what a line up of artists are due to play! This year the festival is being held in Jerez de la Frontera (at Jerez race circuit) between 13-14th August from 8pm to 8am.

Creamfields is a dance music DJ festival which takes place all over the world (Argentina, Ireland, Turkey, Mexico, Russia, Brazil, Portugal and Poland) and is organised by Cream club in Liverpool. This is the second year running for Creamfields Andalucia, and from what we have seen and heard so far, promises to be an amazing couple of days.

It has been known since the festival was planned that The Prodigy are going make an exclusive, one day only appearance in Spain at Creamfields. However, to add even more excitement to the mix, the festival website has now just confirmed the incorporation of the following acts: (as of 8th June)

The current two-day line up as at 8th June:

Tickets cost 70 € (plus the administration fee)

You can purchase a ticket on the website, with their special “print at home” system and avoid lengthy queues and beat the rush from the comfort of your own home.