2014 – A great year for the Costa del Sol and Marbella 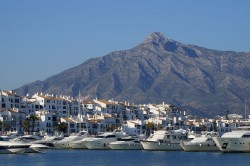 This year has been a great one for the Costa del Sol, especially cities like Marbella that have experienced great number of tourists visit, going back to figures obtained in 2005. This shows a recovery after the start of the crisis.

“An authentic record of visits”, describes the mayor of Marbella, is what happened this summer in the city. The town has experienced during the months of July and August occupation data which have been the “best of the last ten years,” says the president of the Tourism Málaga- Costa del Sol, Elias Bendodo. In fact, with respect to other coastal towns, Marbella grows in a larger percentage than the rest of the towns in the area. Specifically, the city achieved an occupancy rate of 80 percent of its hotels of four and five star during the month of July, an increase of 10.23% over the same month last year, according to the INE (National Institute Statistics), which not only repeated but improved in August.

These figures are closely related to domestic tourism, as the city has had a very strong recovery as this sector is concerned, an increase of 12.60. Summer 2014 closes therefore a notable increase in terms of visitors, overnight stays, hotel occupancy and holding over 300 events in the town.

There was an increase in international tourism too, both in number of visitors and overnight stays. Marbella is recording an excellent tourist year, with a recovery figures going back to those obtained in 2005, before the start of the crisis that hit the country. This growth has been thanks to the visitors of different places of the world, especially the domestic tourism and international from Arabic countries, France and Russia.

We must mention also the innumerable list of celebrities who have visited the town during the summer months. Some of them had their boat for a few days in Puerto Banus, as is the case of the widow of King Fahd. Tita Cervera, Sergio Ramos, Gareth Bale, Mario Vargas Llosa, Eva Longoria and Antonio Banderas, are some of the celebrities that visited Marbella this summer.

With these good results we can say that Marbella has abandoned that image bad image of few years back, when corruption was the protagonist of most of the information related to the city in the national media. But for almost seven years, everything has changed, Marbella is now back in the news for being the resort of personalities front, the business environment, sports, and many other sectors, and a welcome back to those solidarity galas, at the highest level where they have gathered many prominent names.